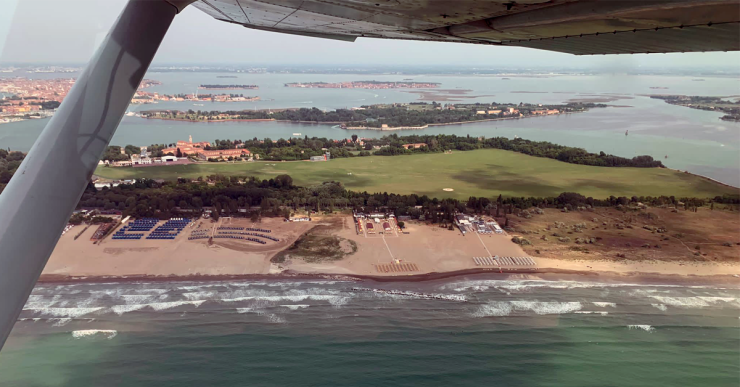 Two AFM pilot trainees embarked on a gruelling three day journey, that saw them flying in a single-engine Cessna 172 from Malta up to Venice and back. The arduous task required some excellent planning. Rick DImech as well Clayton Gomez Blanco rose up to the occassion and left no stone unturned to make sure they accomplish the mission on time.

The two pilots have shown above average skills completing four legs during the first day in some gruelling heat while sharing PIC tasks. Rick flew the first leg out of Malta straight to Scalea where they stopped for fuel. After leaving Scalea, Clayton took over as PIC and they headed towards Ancona, where they encountered some serious turbulence due to mountain waves, with a strata of low clouds over the coast. The third leg on the first day saw them flying the trustworthy Cessna C172 registered I-ACMX, from Ancona to Fano where the above average pilots stopped for lunch. The last leg on their first day of this epic journey took the two intrepid pilots from Fano to the majestic Lido di Venezia. When speaking to MAviO News both commented on the breathtaking views they experienced when overflying the Lido. After landing at LIPV, the two were now ready to head to the hotel for a well-earned rest after sharing a day’s flying that took them all the way up to North Italy.

The second day, started with Clayton Gomez Blanco at the controls, They headed towards one of the most picturesque airports in Italy – Marina di Campo on the island of Elba. They flew at FL75 all the way and although there was the possibility of thunderstorms and showers the weather proved to be fine , even though as Clayton explained to us the approach into Elba was somewhat challenging due to the southerly winds and the terrain around the airport.

The second leg of Day 2, saw Rick Dimech taking the controls from Marina di Campo direct to Scalea. With visibility decreasing and the forming of multiple CBs the two pilots were forced to fly low over the sea . They took the VFR route that kept them out of the busy area around Fiumicino. Once they were getting close to Naples, the weather improved and both flightcrew were able to feast their eyes on the islands of Ischia and Capri. They finally arrived in Scalea, where they had planned to refuel and spend the night.

The third and last day of their trip, saw Rick Dimech taking the controls and flying the Cessna 172 from Scalea to Malta through some well-known VFR waypoints that included Tropea, Vizzini and Ragusa. Weather was fine, however once getting closer to the Gozitan coastline, the pair experienced some strong headwinds which exceeded 25 knots. As a result this greatly reduced their groundspeed while they nimbled slowly towards the Comino Tower before making their final stop at LMML.