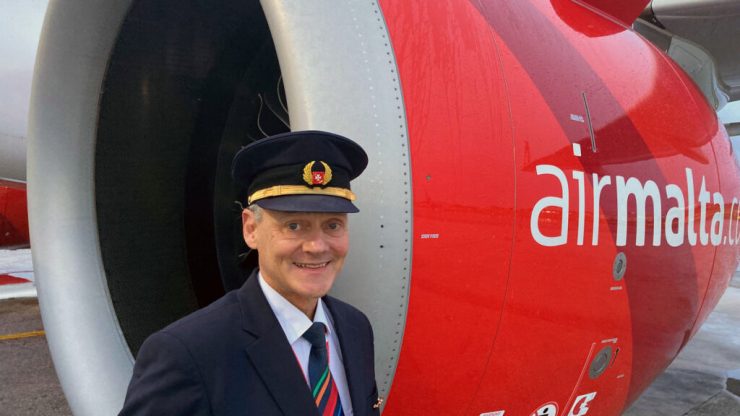 Captain Etienne Zammit Lupi has retired from Air Malta after a 30-year career in which he logged more than 20,000 flight hours. He has flown an array of passenger aircraft starting on the original Boeing 737-200 before moving to the Classic where he flew the -300 and -400 versions. From the Boeing fleet, he hopped onto the much maligned Avro RJ which was inducted in the Air Malta fleet in 1994. After his spell on the RJ, he moved to the Airbus family until performing his last flight KM612 Malta – Rome – Malta on 10th January 2022.

After his type-rating and supernumerary flights, Etienne Zammit Lupi was released on the line as a Boeing 737 First Officer on 28th February 1993. He was promoted to the left-hand seat 7 years later and performed his first flight as a captain on 5th September 2000. After almost 22 years on the left hand seat, Etienne Zammit Lupi has now decided to move to pastures new and close the KM chapter in his illustrious career as an aviator. It is worth noting that while in the employ of the national carrier, Captain Zammit Lupi was trusted with a number of ACMI leases including flying for British Airways, Flightline, Air Holland and OLT in Poland among others.

Captain Etienne Zammit Lupi started his training at the Aviation Academy of Australia based in Perth way back in February 1991. He performed his first solo flight on 27th March of the same year on board a Piiper Tomahawk registered VH-FTN. (left)
Etienne Zammit Lupi, together with Matthew Scott were featured in a newspaper article at the time, while undergoing their initial type-rating course on the Boeing 737-200 at the British Caledonian Flight Training Simulator, which was based at Gatwick, UK. (right)

Captain Etienne Zammit Lupi is seen posing for the camera on his last day of work at the Maltese national carrier.

At the end of his last flight at the controls of Airbus A320neo registered 9H-NED, Captain Etienne Zammit Lupi was presented with a memento by the Chief Officer Flight Operations Captain Emvic Debono (first from left) and Technical Pilot Captain Mark Micallef (second f