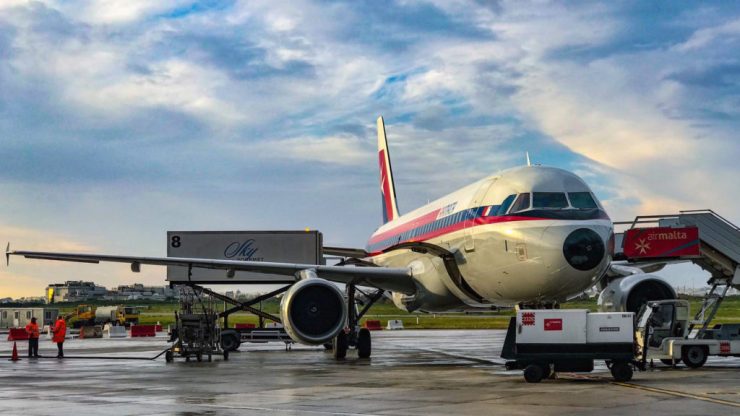 After MAviO covered in detail the departure of Air Malta’s 9H-AEI during the past 48 hr, we received this great contribution from Malta Aviation Society President Joe Ciliberti:

It all started by casually walking the bridge from MIA to SkyParks for an airshow appointment when I see Captain Alan Farrugia (In-Nin) waving at me and asking me to stop to have a quick word with me. He told me about EI needing to go for a paint job and in his own words “you are the only one who can get this done for us”. I wasn’t so convinced of his opinion about me but told him I will certainly work on it because I shared his opinion that painting one jet in retro colours was a brilliant idea.

Anyway, that same day in the evening, I called Johan Debattista who was the ‘aviation man’ within the new ministry of Hon. Karmenu Vella. I had no reply but left a message on his phone and wrote an email to the Minister himself at around midnight. Amazingly, the Minister replied within 40 minutes where he told me he agrees with the proposal and will see what he can do. When I asked him how come he is replying to my email at this time, he said he was still on board KM103, switched his phone up after landing and read my email! Sure enough, with Johan’s encouragement added, EI ended up painted in the lovely retro scheme.

So while appreciative of Hon. K Vella’s hand in having EI in the retro scheme, I feel that the result was for the good of all and has been enjoyed by many of these last few years. I may add that I had sent Coress Gouder (from Konrad Mizzi’s Ministry) a WhatsApp message this last September 28th (still on my phone) about having one of the Neos painted in the retro scheme but have had no reply. Coress is now, as far as I know, no longer involved in anything to do with that ministry.