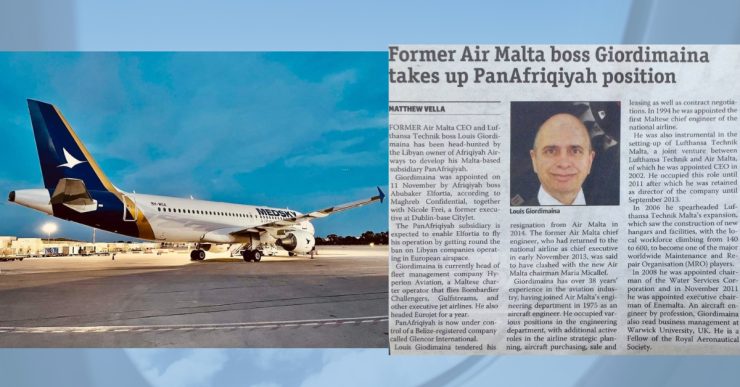 Abubaker Elfortia has been known in Maltese aviation circles for almost a decade. He formed part of the initial group of trusted airline executives that launched the second Libyan state airline: Afriqiyah. AAW was initially launched as a ”paper airline” with the help of the now defunct Italian carrier Blue Panorama Airlines. Their first aircraft was a wet-leased Boeing 737-400 which was flown in a very interesting hybrid scheme. Elfortia has long held ambitions of flying from Libya direct to Europe and thus eliminate the need for Libyans to travel via Turkey, Cairo or Tunis. Since 5A- registered aircraft are banned from flying into the EU, having a Maltese AOC was one of his top priorities to circumvent the blacklisting. In late 2016, he hired ex-Air Malta CEO Louis Giordimaina to run his newly formed company, known as PanAfriqiyah. The company was registered with the Malta Financial Services Authority in 2015. With him on the board were some KM veterans as well as a former Cityjet executive – Nicole Frei. Despite the enormous effort put in, PanAfriqiyah failed to secure a Maltese AOC. MAviO News is reliably informed, that besides the huge opposition from the highest echelons at TM-CAD at the time, the local authority had insisted that the nascent airline did not meet eligibility criteria for the issuance of an EU-based licence.

Elfortia has persisted and despite the setback of 2017, when the PanAfriqiyah plan foundered, his determination seems to be now paying off. The Libyan ”paper airline” has got a very ambitious plan of expansion that sees it connecting Libya with main hubs in Europe. With the launch of flight operations expected within weeks, Malta MedAir is likely to be kept particularly busy flying for Medsky, as the Luqa Aviation Park headquartered company seeks to induct the third aircraft on the Libyan contract after 9H-MSA and 9H-MSB. Has Abubaker Elfortia finally won his bet? Only time will tell but the coming four weeks will be crucial as Medsky launches its flights amid much anticipated fanfare. Although Medavia / Melair had won the race to operate flights to Libya, starting on 21st September 2021, these only lasted a few weeks before coming to an abrupt end during the first week of November 2021. The Malta-Libya hop at the time was flown by Greek operator Lumiwings using the sole Boeing 737-300 registered SX-LWA in the fleet.