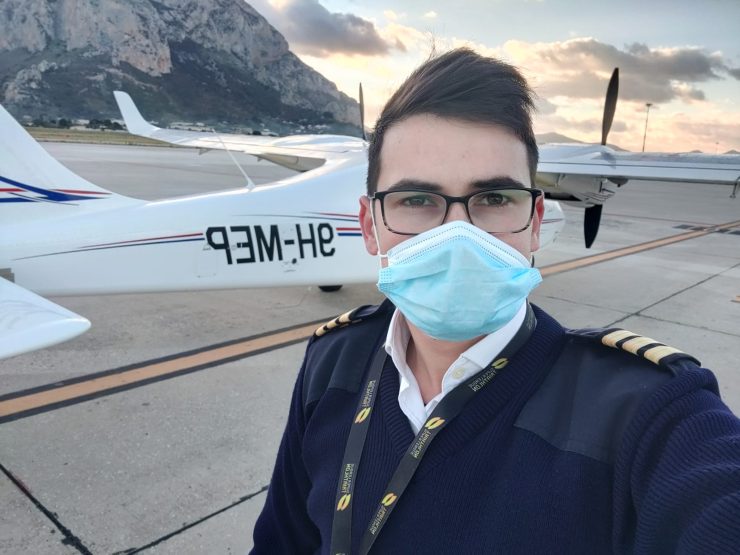 Matthaeus Sciberras has carved his name down in Maltese history books as the youngest Class Rating Instructor ever on the TM-CAD records. Since young , he always showed great passion for anything that flies and his parents surprised him with a trial flight at just 4 years of age with well known aviator Lt Col Alex Dalli. Young Matthaeus is a very determined person and by the age of 18 he passed his PPL skill test. He continued to further his studies in the aeronautical field and in September 2020, at the height of the pandemic he passed his MEP, CPL and IR skill test.

During the past 72 hours Matthaeus has successfully passed his Multi-Engine Class Rating Instructor test and as a result he will now be instructing on both SEP and MEP aircraft at Malta School of Flying where he is employed. Besides the flight instruction part, he is also actively involved in ground instruction where he has been part of the team for the past three years. When talking exclusively to MAviO News, he revealed that his top three favourite aircraft are the Diamond DA62, the Tecnam P2006T and the Cessna 172. He added that in the future he would like to be in the left hand seat of a Gulfstream business jet or the Airbus A380.

The young CRI thanked his parents and all those who gave him tremendous support to come this far in his career. Although there are times when one feels disheartened, Matthaeus is a firm believer that quitting is not an option and that every aviator will get his opportunity to shine eventually. Well Done Matthaeus!