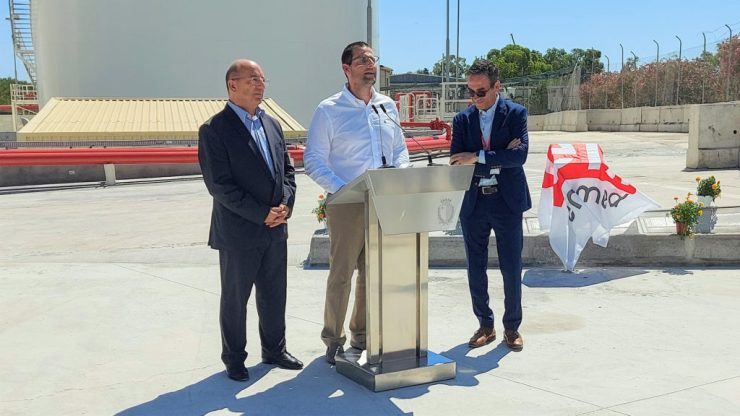 The project inaugurated by Enemed at Malta International Airport forms part of a chain of investments that reaches the €100 million mark.  Thanks to this project Enemed increased the efficiency in its handling of Jet-A1 fuel as in a number of ways.

With this new project Enemed eliminated two stages from this process:  Jet A1 is still received at the Has Saptan Ocean depot; however, from there it is pumped directly to the new Intermediate Depot at the Airport itself.  This depot is next door to the Airport Depot.

The fuel company has also increased security of supply since whilst before it had only 2 days’ supply at the Airport, now it has between 3 and 4 weeks’ supply on the Airport grounds.  This reduces the pressure on the pipeline between Has Saptan and the Airport by giving Enemed more time to repair should anything happens to this crucial ‘lifeline’ for the Airport.

The project has also introduced electronic controls of Enemed’s operations.  All valves are controlled centrally from the Digital Control System which is computer operated.  This includes receiving of fuel from the Ocean Terminal, transfers between tanks on the Airport ground (between Intermediate depot and airport depot), the filling of refuellers and electronic stock control.

Part of this investment includes also the replacement of the fleet of 10 aircraft refuellers by Enemed over a 3-year period.  The new vehicles are built by Stokota and these too are computer controlled. These refuellers are replenished with Jet A-1 fuel from the new gantries which are part of the new investment by a self-service system.  Crewpersons log into the system with their personalised nametag and request the amount of fuel required.  Through this infrastructure Enemed is also serving a third party company that operates within MIA.

Both the new intermediate depot and the refurbished airport depot are now protected by means of an automated firefighting system with an on-site water storage for the safety of employees, surrounding third party companies and neighbouring residential areas.

The company’s focus will now be on the works currently underway at Has Saptan which will see the upgrade of the underground storage facility for environmental safety, a new above ground facility that will enable the complete decommissioning of the Birżebbuġia plant and a new state of the art Head Office Building. These are expected to be completed by the end of this year.

Could the “Sea Monster” rise again?