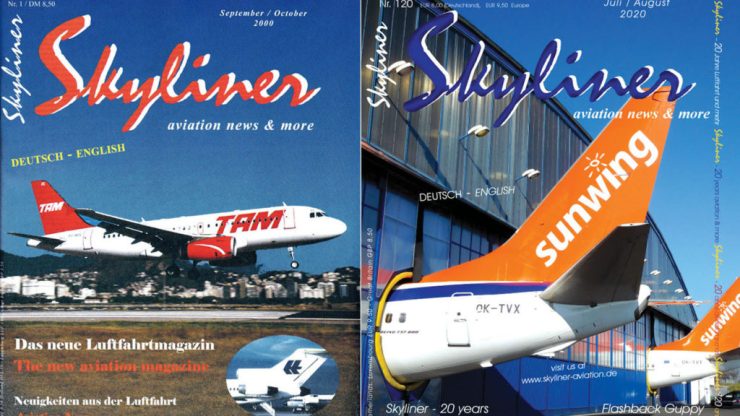 Skyliner Aviation & News is twenty years old. A truly important milestone for Chris Witt and his team. The magazine has almost cult following and is one of the most sought after by civil aviation buffs as it always has cutting edge news about the latest start-ups around the globe and some truly stunning pictures that are almost impossible to find anywhere else.

The journey for editor Chris Witt has been a long one indeed. He started his career at Munich airport as an operations agent in 1981. In 1985 he moved to the now defunct LTU Group and rose through the ranks, where he was finally appointed manager responsible for ground operations. In 2000, he started what was to become one of the best known magazines in civil aviation – Skyliner Aviation & News. His whole idea, was to have a magazine in A4 format that is not shackled to particular companies through promotional write-ups and advertorials.

MAviO which has been a regular contributor in Skyliner Aviation & News for more than 10 years. Together with MAviO there have also been a number of other Maltese contributors including Stephen Borg, Malcolm Bezzina and Jonathan Mifsud among others.

Since 2007, MAviO’s staff photographers Andre Abela and Rowen Aquilina have had their pictures featured prominently on the German based magazine. The photo album dedicated to the Valletta Summit held in 2015 was probably one of the very best published on the subject anywhere and is a feather in their cap. We wish Chris and his team at Skyliner Aviation News & more the very best on this important anniversary being celebrated.