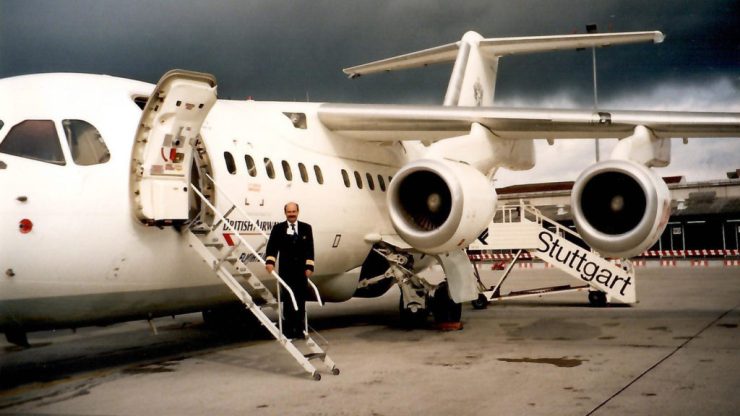 A lot has been written about Air Malta’s decision to opt for the much-maligned RJ70 when Joseph N Tabone was at the helm as CEO between 1992 and 1997. Politically responsible for the national carrier during these turbulent times was Minister Dr George Bonello du Puis, under whom the hub concept was being pushed to the fore in the early nineties. During the signing of the agreement on 28th January 1994, both Dr Bonello Du Puis as well as Charles Masefield, president of Avro International Aerospace, addressed the press. The idea of making Malta a hub in the Mediterranean has been recently resurrected by the ex-Minister for Tourism Konrad Mizzi. Despite the airport having no air bridges and no detailed market research ever being carried out except for theoretical studies, the concept refuses to die and the hub idea continues to surface at the most inopportune of times.

MAviO has recently caught up with veteran airline captain Charles Maniscalco who played a pivotal role in the introduction of the Avro RJ into the KM fleet. Charles is a highly experienced pilot having accumulated well over 22500 hours of flight time and was in command of on an array of jet aircraft from the Boeing 737-200 to the Airbus A321. On his impressive curriculum, the RJ70 stands out like a sore thumb. How did the opportunity to fly the RJ70 come about? Captain Maniscalco quickly quips that a new strategy at the national carrier saw the company buying the RJ70 regional jet between 1994 and 1996.  Keen to add a new type on his licence and even to being promoted to a Line Training Captain role, he saw the acquisition of the RJ70 at Air Malta as the perfect occasion for his own personal advancement as an aviator.

As part of the conversion training onto the Avro RJ Captain Maniscalco together with a number of other Air Malta flight crew went to Manchester where BAe had its training centre. While in the UK, the RJ70 demonstrator aptly registered G-OLXX was pressed into service with the now defunct airline – Flightline. The company was operating a bus stop flight to Stuttgart on behalf the carrier that styled itself as the world’s favourite airline – British Airways. Captain Maniscalco and his colleagues found themselves in the right spot at the right time. In the speediest of manners the KM crew had their Maltese licence validated by the UK authorities. Stuttgart airport was undergoing a major upgrade and the Jumbolino, as it came to be affectionately known at Crossair, was the only aircraft that could keep the link alive due to the myriad of restrictions in place. Runways and taxiways were undergoing a major upgrade at the time and the RJ70 was the only airliner that could fly in and land on the short and narrow dedicated taxiway.

Captain Maniscalco speaks fondly of his time flying the line for British Airways. It helped the Maltese crews get more confident with the aircraft type but more importantly it exposed every single individual undergoing training to the Standard Operating Procedures at British Airways. He added that BA pilots were a little stunned and somewhat irked when they found out that a gaggle of Maltese pilots were flying on behalf of BA. It was all a little confusing Captain Maniscalco confides but in the end it worked out particularly well. We almost spent five months (July to October) during 1995, flying the Stuttgart route. Although not a long flight, the hours at which it departed were a little odd and there were times when the crew had to sleep over in Stuttgart.

Captain Maniscalco recalls that BA treated its (KM) pilots very well and thanks to this experience they had access to the BA crew rooms at Compass Building, Heathrow. He added that since then, more than 25 years have passed, yet to this day  he is still mesmerised  at the state of the art facilities that BA pilots had access to.

Unfortunately, the RJ70 in Air Malta service was misused and abused. The aircraft was pushed into service on routes, where the RJ was totally inept. Sometimes, passengers’ luggage had to be left  behind, otherwise the aircraft would have ended outside the flight envelope. There were also times when the aircraft was sent with no passengers but full of luggage, which would have been left behind by a preceding service flown earlier. The decision to go ahead with the acquisition of the RJ still haunts the Maltese national carrier and the story of the 31 engines that had to be changed while the aircraft was in KM service has become the stuff of legends whenever pilots and maintenance personnel meet.

After his stint at Air Malta, Captain Maniscalco moved to pastures new. He joined Aegean Airlines and it turned out to be an excellent experience. The soft spoken captain  is also an accredited aircraft accident investigator and today enjoys an enviable reputation as a talented pilot.