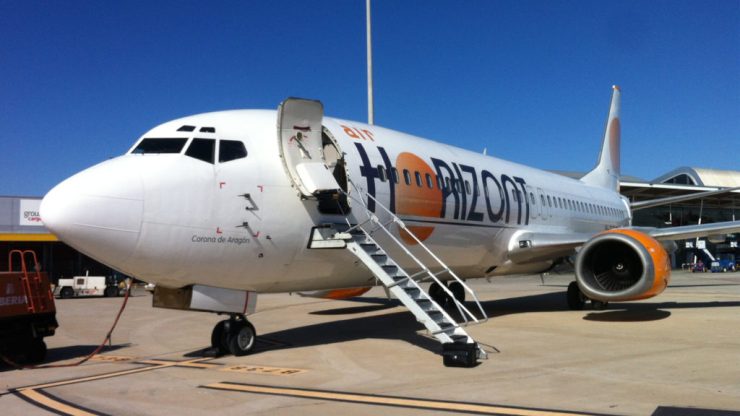 Juan Luis Diez and Manuel Salhi came up with the idea of creating an airline way back in 2010. Ryanair had just abandoned four apparently promising routes out of Zaragoza. Their initial choice was the Fokker 100, an aircraft which Manuel Salhi, a former senior captain at the now defunct Spanish airline GirJet, knew like the back of his own hand. Although the initial plan foundered, Diez and Salhi partnered with their investment banker friend in order to reactivate the project in late 2013. The latter business plan saw a number of changes from the initial 2010 draft. Instead of the Fokker 100, the nascent company opted for the Boeing 737-400. The aircraft from the Boeing stable had enhanced power, uplift capability and increased range when compared to the Fokker 100. The project found the support of the Aragonese political class who was eager to increase the connectivity to the region. Initially, the plan envisaged the use of two aircraft, which would have been more than enough to cover for the planned schedule. Juan Luis and Manuel knew from the outset that they needed to find a proactive authority that would assist rather than hinder the birth of the young airline. After some scouting, the two talented managers set their eyes on Malta. Following a couple of exploratory meetings which satisfied both parties involved, the AOC process for the new company was kick-started. The birth of Air Horizont is officially listed in the annals of aviation history as 1st June 2015.

Both Juan Luis and Manuel had nothing but praise for the Maltese authorities. Under the stewardship of Captain Charles Pace, the Maltese Civil Aviation Directorate has managed to attract a number of top players to the island’s register. The investors behind Air Horizont are an eclectic mix and include, among others, an Irish Investment Portfolio that is very active in the airline business. It must be noted that Air Horizont enjoys an above average dispatch reliability among 737 Classic operators. Captain Salhi did underline that the first year was an extremely difficult one because some initial investors did not pay up the promised injection of capital. Nonetheless, this did not deter the two managers and they found a quick replacement through an Irish consortium that believed in the vision of the two aviators.

Today, Air Horizont is an ACMI operator with six Boeing 737-400s in its fleet. The latest addition joined HAT in late 2019 and is an ex-Blue Air machine which has been registered 9H-DSW. Manuel and Juan Luis are fully aware that in order to benefit from economies of scale, the company has to keep a homogeneous fleet. The market has been very receptive to the offerings of Air Horizont. Salhi summarises the company’s product as that of a “capacity provider” to third parties. The company is inundated with work from April to September. The entrepreneurs did, however, point out that ACMI work is highly seasonal and the months from October to March are usually difficult for everyone in this line of business. Seasonal work, and the resultant growth, have to be managed in a very judicious manner. Exponential growth with no clear vision and cost management can quickly deplete the financial reserves of any airline active in the ACMI business. One way in which Air Horizont has chosen to offset costs is by teaming up with Italian stalwart Blue Panorama Airlines. Under the stewardship of UVET president Luca Patanè, Blue Panorama is slowly being turned around after the formerly moribund airline had come close to bankruptcy. At present, the Maltese outfit has three Boeing 734 flying exclusively for Blue Panorama and its low-cost subsidiary blu-express.com. Luca Patanè does not mince his words. He sees great potential in emerging markets. Albania is one of the countries in which Blue Panorama is investing heavily. Air Horizont has deemed it fit to have two aircraft permanently stationed in Tirana flying to a number of destinations in Italy including Milan, Verona and Genoa, while a third aircraft is based in Rome. The latter aircraft is flying a number of charters on behalf of Italian tour operators. The destinations flown from Fiumicino include the Greek islands of Kos, Zakynthos and Mykonos as well as other top Mediterranean hotspots.

Juan Luis doubles also as Accountable Manager of the company. He revealed that he found Transport Malta officials to be very pragmatic and with a “can do” attitude. Two of the most important qualities emphasized by the Maltese authorities to the senior management team were professionalism at all levels of the operation and strict compliance with EASA regulations. As a result of its Maltese AOC, the company opened an office in Malta. This office houses the operations department, CAMO as well as OCC. As accountable manager, Juan Luis divides his time between the Malta office and the Zaragoza headquarters. Despite their busy schedule, both Juan Luis as well as Manuel fly the line with the company whenever their tight schedule permits. Air Horizont received its AOC just a month later than planned. The delay was attributed to the fact that all the paperwork was being processed whilst the Civil Aviation directorate was relocating from the old RAF offices at Luqa to an ultra-modern building in Mosta, a transition meant to offer better services to this ever-evolving industry.

The fifth Boeing 734 to join the Air Horizont  fleet was 9H-MPW. The aircraft was originally delivered to Olympic and is a very well-known airframe in Europe. The aircraft had a completely new interior installed in the UK before it received some attention in Romania. Both managers agree that the company is on very sure footing and economically sound. This achievement is owed to careful planning and a disciplined approach to growth. The company might look at adding further Boeing 737-400s to the fleet, albeit this project is still in its embryonic stages. Air Horizont is also looking at possibly adding freighters, a market which the two former cargo-pilots-turned-managers know extremely well.

Salhi works tirelessly to make sure that everyone within the company feels included, in the full knowledge that a happy workforce will keep clients coming.  The company’s next big project is acquiring the IOSA certification. This will make the company’s offering more appealing to prospective clients. Without IOSA certification it is difficult to work with the big guns, albeit major companies have already taken note of the professionalism that distinguishes Air Horizont. As a matter of fact the fledging Maltese airline has already flown a number of ad-hoc flights for Vueling, Transavia and Air France amongst others. The company is fully aware that the current fleet of Boeing 734 cannot soldier on forever and by 2022 a decision has to be taken with regards to its replacement. The most likely candidate is the Boeing 737-800NG. As things stand, the current investors are very satisfied with their return on capital. Manuel and Juan Luis are fully aware that their resilience is paying off and they have little doubt the company will continue to flourish in the years to come as it gains wider recognition in the fiercely competitive ACMI market.