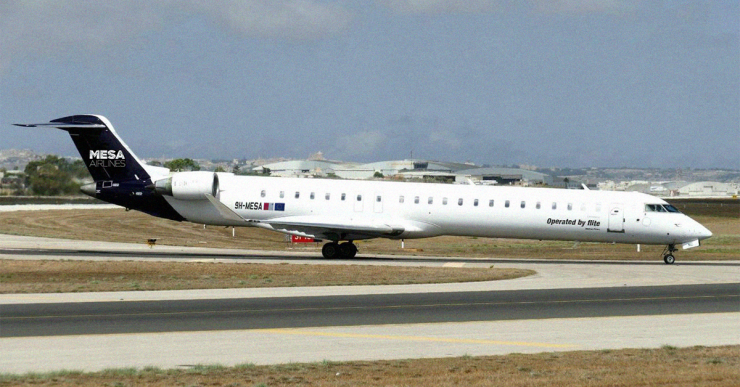 Mesa Airlines, one of the biggest capacity providers in the United States, has initiated the process to get a Maltese AOC. The company has 168 aircraft in its fleet and more than 2600 employees. Mesa flies the CRJ900 as American Eagle, the Embraer 175 as United Express and the Boeing 737 on behalf of DHL Express. The massive company handles more than 350 daily departures.

MAviO News is reliably informed that the new company , MESA Airlines is setting up with their partners Gramercy Associates will be known as FLITE. This new venture is likely to bring a paradigm shift in CPA (capacity purchase agreements) within the EU market. Until now CPA has not proved particularly popular on the continent, however this is likely to change once FLITE enters the market during the first quarter of 2023. The CRJ900 operator is likely to be a major competitor to Cityjet, Air Nostrum, and Xfly among others.

MESA had revealed it wanted to start its EU-based operation in late 2021. This had then shifted to the first quarter of 2022 as the airline’s president Michael Lotz had indicated when speaking to the press in late 2021. Now, MAviO News has information showing FLITE is earmarked to take to the skies early next year. With MESA’s huge experience in the market, there is little doubt that FLITE will be in a strategic position to enrol some high-flying customers for their services.

As TrueNoord aviation expert Angus von Schoenberg wrote in 2018, one has not only to ask what effect will North American-style capacity purchase agreements have in Europe but more importantly whether these would have an effect on leasing regional aircraft in the region.