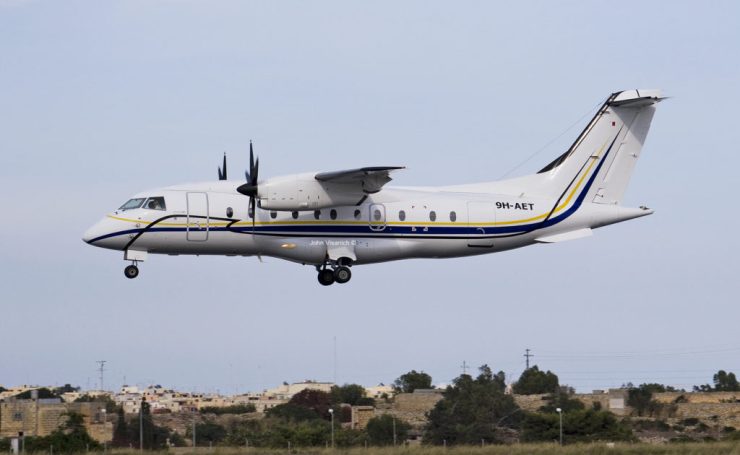 After German oil firm Wintershall decided to leave Libya in the past few months, rumours started making the rounds about the possible fate of the Dornier 328-110 registered 9H-AET. The aircraft is owned by Wintershall’s company in Malta AWIAG, while Medavia manages it on behalf of the German oil firm. Just less than three months ago, Wintershall raised its concerns about the level of security in Libya with the highest authorities and despite the enormous work ploughed, after much deliberation the company decided to pull the plug on the Libyan operation.

The Dornier 328, played a vital role in the German firm’s investment in the Maghreb country, as it provided a much needed air bridge between Libya and Malta. The aircraft was delivered to Wintershall way back in 2004 and was registered D-COMM before being put on the Maltese register and managed by Medavia which can be best described as a Libya aviation specialist.

In the last 48 hours, news surfaced that Airstream International Group have been tasked exclusively with remarketing this very well kept aircraft which carries MSN 3117. Although the value of the Do328 has plummeted in recent years, new German airframer DRA, intends to revive production at a new facility in Leipzig. DRA has been set up by 328 Support Services, the aircraft’s type certificate holder. The initative to revive production of this regional turboprop airliner has the support of the German federal government as well as the authorities in the state of Saxony. It is also worth noting, that Sierra Nevada Corporation had tried to revive the Dornier 328 as the TRJ328 with production to be based in Turkey. However, the project came to a complete standstill, when the Turkish government ended its support in October 2017. Prior to that announcement the Turkish government had committed to buy 50 TRJet aircraft.