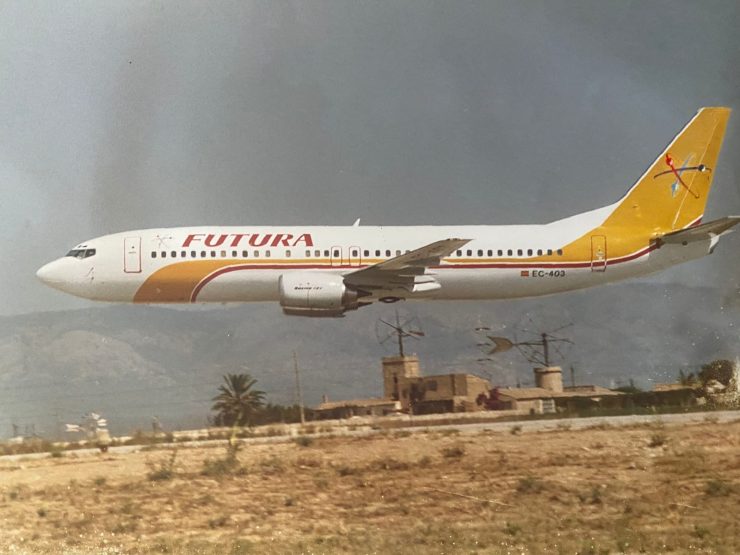 Captain Alejandro Ballarin officially retired from line flying on 3rd September 2022. His name will forever be intertwined with that of Spanish charter carrier FUTURA where he spent almost 20 years . Though now defunct, FUTURA International lead Spain’s charter revolution in the nineties. It was set up on 28th November 1989, as a joint venture between Spain’s Certidesa, a subsidiary of Banco Santander (60%), the Irish flag carrier Aer Lingus (25%) and Belton Air, a company formed by the airline’s management team (15%). Futura selected the popular and developing Balearic tourist island of Mallorca as its operational base.

Captain Ballarin Sanz has been involved in the aviation sector for more than 37 years. He spent his last four and a half years at Corendon Airlines Europe where he was a valuable member of the training department. As many young pilots can attest he was a mentor to many during the embryonic stages of their career. He always had words of encouragement to those new to the industry and his line checks were always an interesting learning curve. Before his move to the flightdeck, Captain Ballarin spent a year (1984) as a cabin crew member at Iberia flying on the venerable DC-9 and Boeing 727. This gave him an insight few other captains had of all the operational procedures that go on once the cockpit door is closed. His pragmatic approach made him a joy to fly with not just for first officers but for cabin crew alike.

His flying career started in Palma de Mallorca where he joined Ambulancias Insulares as an F/O on the Rockwell Turbo Commander. A few months later he was promoted to captain and was also involved in the company’s management while being given a postholder role. His big leap onto the big metal came in 1988 when he joined Air Europa as a young First Officer on the Boeing 737-300.

The love of his life was beyond any reason of doubt FUTURA where he spent almost 20 years flying the Boeing 737 Classic and also the NG including the mischievous 737-900 which he was not particularly fond of given its handling characteristics. At FUTURA Captain Ballarin rose through the ranks to become one of the most valuable assets within the high flying company. The collpase of FUTURA came as a shock, however “El Chino” as he is affectionately known by colleagues showed admirable tenacity when in 2009 he joined little known Air Andalus flying the Embraer 135/145 regional jet. After Air Andalus closed down, he had spells at Ryanair, Pegasus and also Antalya-based charter company Tailwind Airlines before joining Corendon Airlines Europe where he reconnected with many of his ex-colleagues at FUTURA.

Probably one of the highlights in his career came in August 1990, when together with Captain Juan Payo and First Officer Tomas Rodriguez they picked up a new Boeing 737NG from Seattle, flew it across the Atlantic and did a low pass along Palma’s runway before coming in to land. This mesmerised the FUTURA staff and bosses at the airport, who had convened on the Balearic island to welcome the third FUTURA airplane. It was the first new aircraft delivered direct from the United States for the Spanish leisure carrier.

After spending almost 25000 hours in the air of which 21800 as captain, Alejandro Ballarin Sanz leaves the industry as a very happy man, having accomplished his childhood dream and having had the opportunity of flying out of Palma de Mallorca where he resides until this day. As he had time to say during his farewell address, it is time for him to focus on his family and also his other passions besides aviation. Ad Multos Annos Captain Alejandro!