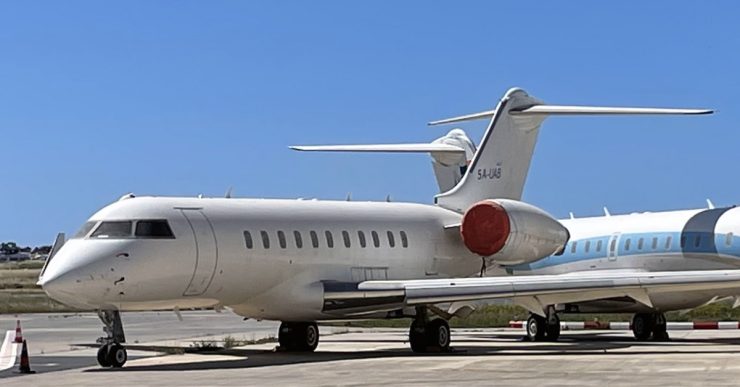 Earlier in the day (23/04/22) one of MAviO’s roving correspondents sent us a great picture of the two Bombardier BD-700-1A11 Global 5000 sitting forlornly on Apron 3.. The aircraft can be seen huddled together on the MCM ramp . Registered 5A-UAB and 5A-UAC the aircraft have fallen victim of the political wrangling inside the Maghreb country. They were originally operated by United Aviation, which was established in 2006. Before the 2011 uprising, United Aviation, used to bring its aircraft for maintenance in Malta.

In 2015, with Libya effectively having two seperate governments, the jets worth some €70 million were at the centre of a much heated contention between the two. At the time a court had temporarily upheld an application by a Tripoli-based company to seize the two private jets parked at MIA from the representatives of the Tobruk government, until a dispute over the ownership of the aircraft was decided by the courts.

Although the Maltese courts had settled the ongoing dispute between EACS and UAC, over the two luxury aircraft at LMML by February 2021, there still seems to be discord over who will foot the maintenance bill to get them airworthy once more. The two graceful business jets make a sad sight. They are important assets, that could help the Libyan nation to come out of the doldrums. If they are ever returned to an airworthy condition both aircraft should enable the Libyan authorities to have the flexibility and accessibility needed at this delicate hour for the oil-rich country.